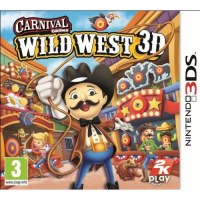 We buy for: £1.32
Sell 3DS Games. Get Cash for Carnival Games Wild West 3D. Howdy partner! It's time to switch on your swagger and step right up to… Carnival Games: Wild West 3D, the newest game in the Carnival Games franchise that encompasses over seven million units sold worldwide. A rootin', tootin' good time, Carnival Games: Wild West 3D brings eye-poppin', motion-compatible game play to a honky-tonk of a good time by fully utilising Nintendo 3DS' built-in motion and gyro sensor capabilities. Wearing the shiniest spurs, players get in the action of 23 all-new western-themed games and attractions as they test their reflexes in the Shooting Gallery, partake in arm rasslin' in Strong Arm, and discover why it's good to be a Quick Draw in the Wild West! And that's not the whole kit and caboodle— there are a slew of jump-off-the-screen 3D prizes, special quests, and state-of-the-art Streetpass Communications. With the combination of the Wild West, a popular franchise, and the use of innovative game play technology, Carnival Games: Wild West 3D is the ultimate in portable entertainment! Key Features: * It's a high noon showdown with Wild West skill games including, Ricochet, Outlaw Rangler, Git the Gold, Shooting Gallery and Posse vs. Bandits. * Introducing Deeds! Earn new sidekicks like a rattlesnake or an armadillo by winning arm wrestling matches or finding bandits. * Collect Play Coins as you pass others with Streetpass and swap them for Bison Bucks at the Bison Buck Exchange. * Collect tickets to win 3D prizes that jump off the screen, including a rattlesnake rattle, a bear tooth necklace and a sasperelli mug or check out the western wearable's for every cowgirl of cowboy! * By using your Nintendo 3DS camera feature, you can use the included Augmented Reality (AR) Carnival Games Wild West 3D card to bring prizes to life before your eyes.