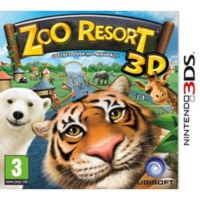 We buy for: £2.10
Sell 3DS Games. Get Cash for Zoo Resort. Zoo Resort is the first 3D zoo simulation game, offering players an incredibly realistic and life-like zoo and management experience. It's up to the player to build the most successful zoo possible, including choosing their animals, deciding where to set up their habitat and entertaining visitors with the animals' talents. Plus, watch and almost touch the animals as they come alive in 3D to show off their personality and skills. Features: Build your own zoo and manage it to success. * Bring in animals, take care of them, manage the zoo and attract visitors to build a successful zoo. * Some animals may get sick, while others may gain popularity, so players need to manage which animals are out each day and which are in prominent locations. Wide variety of 100+ realistic 3D animals to collect and discover. * As players progress in the game, they unlock more and more animals to bring to their zoo, from penguins, lions and elephants to even extinct animals like dinosaurs The rarer the animal, the more traffic the zoo will get. * As players unlock animals with their points received from entertaining visitors, they learn fun animal facts and trivia. * With more than 100 animals, Zoo Mania offers more than any other handheld zoo simulation game, and the realistic 3D effects, movements and noises create a lifelike zoo experience. Watch your animals perform awe-inspiring talents and movements and film them to entertain visitors. * Once the player has built strong relationships with their animals, they can use the Nintendo 3DS gyro sensor to capture their animals' talents as if the handheld were a video camera. The better shots the player captures, the more positive feedback they will get from their audience, and the more successful their zoo will become. * Watch and almost touch the animals as they come alive in 3D and show off their personality and skills in mini-games using the gyro sensor.