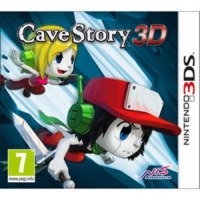 We buy for: £15.24
Sell 3DS Games. Get Cash for Cave Story. Cave Story 3D is a side scrolling shooter in a 3D environment. The player must survive against a variety of enemies and environmental hazards. Later in the game, many challenges are derived from navigating through these hazards with limited flight ability. Levels are often not strictly linear. Gameplay is a combination of high-speed shooting/action scenes, platforming, exploration and light puzzle solving. The player (Quote) wakes up inside an eerie cave with no memories of his past. He explores the island, becoming involved with its residents and other visitors, one of which has gained great power over the island and seeks to create an army to conquer the surface world. The entire game is fully reconstructed in 3D, giving a sense of depth perception on every stage. In some areas, the game play plane can be made to curve, to give the scene a greater sense of depth. However, in most cases, any curvature will be gradual and subtle, as all characters and projectiles will follow the plane.