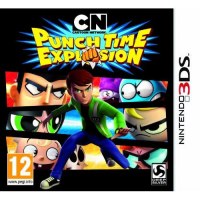 We buy for: £1.32
Sell 3DS Games. Get Cash for CN: Cartoon Network Punch Time Explosion. A mysterious force is swapping and merging 9 Cartoon Network universes together, forcing unlikely partnerships and dastardly new alliances of evil. Dexter and the forces of good must piece together the inter-dimensional puzzle which is pulling the universes together before it is too late. Featuring the casts of some of Cartoon Network‘s most iconic shows. Cartoon Network Punch Time Explosion is the network‘s first-ever all-star brawler set to make its debut on the Nintendo 3DS. Fans can go toe-to-toe with characters from their favourite Cartoon Network shows including Ben 10, The Powerpuff Girls, Dexter‘s Laboratory, Chowder, Captain Planet, Samurai Jack and many more.