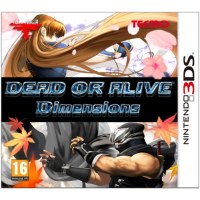 We buy for: £1.76
Sell 3DS Games. Get Cash for Dead or Alive: Dimensions. DEAD OR ALIVE Dimensions retells the saga of the franchise in a never before seen way, as you discover the secrets behind the ongoing power struggle within the Mugen Tenshin ninja clan and the carefully guarded “Torn Sky Blast” fighting technique. The evil DOATEC company, host of the DEAD OR ALIVE tournaments, tries to uncover the secrets for perfecting the creation of a “super fighter”. DEAD OR ALIVE Dimensions will see the return of an array of female characters, renowned for their beauty and classic to the DEAD OR ALIVE series, such as Kasumi, Leifang and Tina Armstrong, along with more recent characters such as Kokoro, Eliot and Hitomi, which are sure to appeal to fans old and new. In another first, every character in the DEAD OR ALIVE series is available in one game. Through the CHRONICLE mode players will follow certain characters’ journeys to unravel the truth behind each of their stories. With the first four chapters representing the first four DEAD OR ALIVE games, the fifth chapter acts as an epilogue to the epic saga. Using the Touch Screen, players will be able to learn how each of the characters relates to one another and unravel the story behind DEAD OR ALIVE Dimensions. • Choose from 25 playable characters and battle in interactive environments that come to life in stereoscopic 3D. • Play in 12 game modes and tackle friends or fight by their side in wireless multiplayer combat. • Everyone can jump right in thanks to a Touch Screen control option that makes triggering combos easy. • Acquire new content via SpotPass and keep the combat flowing when your Nintendo 3DS is in Sleep Mode thanks to StreetPass challenges against other players.