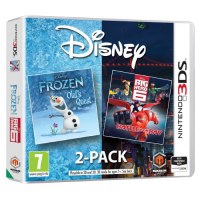 We buy for: £3.05
Sell 3DS Games. Get Cash for Disney Frozen/Big Hero 6 Double pack. 2 epic cinema blockbuster inspired kids' games in 1 great value double pack. Both games play as original adventures following on from the events in the films. Action-packed double pack full of your favourite Disney Frozen & Big Hero 6 characters Play through lots of levels, discover hidden collectables and unlock accessories. Disney Frozen: Olaf's Quest. Join Olaf, the happy-go-lucky snowmen in this puzzle platform adventure game. Guide Olaf through 60 levels navigating hazards and mischievous natives along the way. A light hearted, cheerful romp, injected with humorous action that players of all ages and fans of the film will enjoy! Big Hero 6: Battle in the Bay. Help Hiro and the team defeat the bots in this action-packed combat platformer! Following on the heels of their super hero debut, the Big Hero 6 team has targeted a dangerous gangster named Yama and his legion of out-of-control fighting robots. Use their unique skills to help save the city of San Fransokyo from a battlebot invasion. Each of the adventure's 30 story levels tests the talents of a specific character, where players face an assortment of enemies and hazards. Features climactic boss showdowns, hidden collectibles that unlock potent upgrades for the crew and special Challenge Mode versions of each stage.