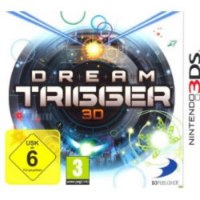 We buy for: £1.05
Sell 3DS Games. Get Cash for Dream Trigger. Dream Trigger 3D is a completely original arcade shooter where players trigger sonar bombs to expose colourful enemies and then blast them into multicoloured 3D patterns to create a first of its kind handheld gaming experience. Dream Trigger 3D features over 100 challenges to achieve, 50 levels to conquer and 10 environments to explore. Ultimately each player is to be the “fixer of dreams” and end nightmarish attacks forever before being consumed completely. Features: * Stunning 3D graphics – Dream Trigger 3D showcases the graphical abilities of the Nintendo 3DS system and creates a hyperactive environment and inventive design throughout set in a world of dreams. * Dynamic multi track musical store - The visuals are set to an original soundtrack that remixes classical music compositions into mesmerizing electronic beats providing an unparalleled immersive experience as players destroy enemies, dodge attacks and move through a variety of layered environments that explode off the screen in 3D. * Extensive single player gameplay - With over 100 challenges to achieve, 50 hypnotic levels to defeat in 10 different dreamscape environments, players can blast their way as conquerors of nightmarish dreams in World Play Mode, Free Play Mode and Time Attack Mode. * Two Player versus mode - Activate sonar in two-player Versus Mode to reveal enemies and to temporarily disarm the opponent in a battle to score the most points.