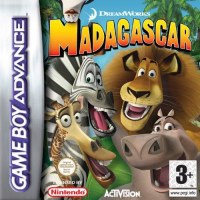 We buy for: £0.75
Sell Nintendo Gameboy Advance Games. Get Cash for Madagascar. Based on the highly anticipated animated feature film from Dream Works, Madagascar is the only game that lets players enter the world of four hilarious Central Park Zoo animals, a personality packed crew made up of a lion called Alex, a zebra called Marty and a giraffe called Melman and Gloria the hippo. Players develop new skills as they take the role of each zoo animal, helping Alex maximize the power of his claws: pumping up Marty's jump: and learning Gloria's butt smash and running barrel move: and perfecting Melman's helicopter spin and ammo-throwing neck fling, which he uses to launch coconuts. Players test their animal abilities as they explore a variety of diverse environments in mini-games and 11 action-packed chapters. Players can improve their performance as they replay chapters and unlock character specific bonuses and cheats. The Fun is Never Done.