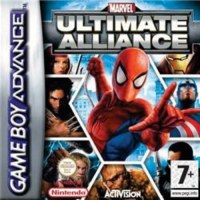 We buy for: £3.05
Sell Nintendo Gameboy Advance Games. Get Cash for Marvel Ultimate Alliance. * Assemble your super heroes - Create the ultimate team and dynamically switch members, starting with 20 super heroes and unlocking even more as you progress. * Customize your team - Use a universal team upgrade system or each member for maximum effectiveness * Change the course of the game - The missions you accept will have a direct impact on how the story pans out * Fight in no holds barred combat. You can fight while airborne,on the ground and even underwater! * Co-operate or compete online * Unique comic book missions that are unlocked throughout thegame will re-enact legendary Marvel battles Unleash the greatest super hero alliance ever! Marvel: Ultimate Alliance is an all new Action/RPG that lets players create their ultimate team from the largest super hero alliance ever as they engage in an epic quest to determine the fate of the Marvel Universe. For decades, Earth's super heroes have opposed evil in their own cities, and on their own terms. But now, Dr. Doom and a newly reformed Masters Of Evil have plans for world domination, and the heroes must band together to defeat them. Players can create and control their own completley unique team, selecting from the largest roster of legendary super heros ever assembled in one game.