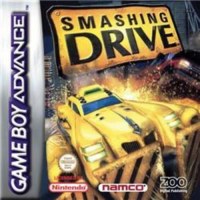 We buy for: £3.05
Sell Nintendo Gameboy Advance Games. Get Cash for Smashing Drive. When you are playing Smashing Drive in arcade mode the game consists of three cities and 13 courses in arcade mode, which is split into four additional bonus courses. The overriding goal is to take your taxi to the finish line before a preset timer expires. The best way to achieve that goal is to squash the accelerator, grab as many turbo power-ups as possible, and take as many shortcuts as you can find, some of which is are rather amusing, such as one that launches you up the side of a skyscraper in pursuit of a giant gorilla. Smashing Drive is a simple, graphically impressive racer that can be played in short bursts.