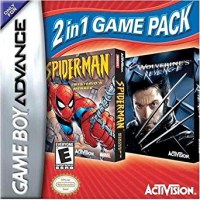 We buy for: £6.05
Sell Nintendo Gameboy Advance Games. Get Cash for Spider-Man Mysterios & X-Men Wolverines: 2 in 1 Pack. Spider-Man Mysterio's Menace & X-Men Wolverine's, are two fantastic games in a bundle pack. Spider-Man Mysterious menace the mastermind of movie effect mayhem is back once again, casting New York city into confusion with his head bending box of tricks, and his classic spidey moves good old fashioned spider wall crawling, with multiple action. Get the strength you need to battle to the end. What is real? What is illusion? As Mysterio gets more powerful it becomes harder and harder to tell, but Peter Parker is not the kind of guy to give up easily, and as his alter-ego Spider-Man, he has the ability to do something about it. X-Men 2 Wolverine's Revenge is the only action-adventure that allows players to assume the role of Wolverine. After discovering that a deadly X-Virus had been activated within Wolverine's body, the player has 48 hours to acquire the antidote from the evil organization that gave them not only the disease, but also their mutation.