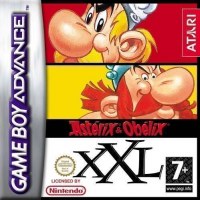 We buy for:
Asterix and Obelix the two gallic chums, once again pitted against the Roman Empire. The game takes you through 6 levels, in search of kidnapped villagers. The player controls both Asterix and Obelix by switching between them both at relay stations, which adds to the gameplay. Also each character has a number of unlockable combo's which take out enemies in a variety of amusing ways.
GA581
Check out what our customers say Click on any logo to view feedback
Trustpilot