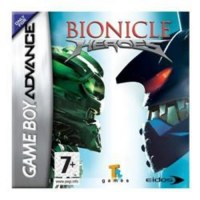 We buy for: £0.75
Sell Nintendo Gameboy Advance Games. Get Cash for Bionicle Heroes. * Over 25 levels of action packed adventure in 6 distinct and richly detailed environments across the island of Voya Nui. * Battle against over 50 BIONICLE characters from the past and present, including the new 2006 characters: the Piraka and the titans Axonn and Brutakka. * Play as the six heroic Toa, each with their own unique weapons and abilities. Upgrade your Toa to make the ultimate heroes. * Discover the secrets the island holds: bonuses, power-ups and even the ability to play as the dastardly Piraka! BIONICLE Heroes takes you to the mysterious island of Voya Nui. Here, on a world populated by BIONICLE heroes and villains past and present, you must take control of the heroic Toa Inika and battle against the dastardly Piraka in a fight for the future of the island.