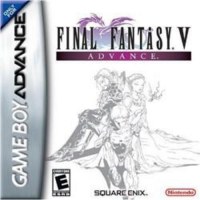 We buy for: £23.49
Sell Nintendo Gameboy Advance Games. Get Cash for Final Fantasy V. Originally released for the Super Nintendo in Japan in 1992, Final Fantasy V ranked number 15 in a recent poll of the 100 greatest video games of all time, according to the readers of Famitsu, the well-respected Japanese magazine. Now you can carry all the guts and the glory, the tragedies and intricacies, the sweeping music and all the memorable characters of this deserved classic everywhere you go, thanks to Final Fantasy V ADVANCE. Join young hero Bartz and a band of mysterious adventurers on their quest to unravel the secrets behind the four elemental crystals protecting the world from evil. FFV ADVANCE features updated graphics, a vastly improved script and new side quests that will reward only the bravest of warriors. *An RPG classic in your pocket *Expanded job system with four new jobs exclusive to GBA: cannoneer, oracle, gladiator and necromancer *Updated graphics and vastly improved script *New 30-floor dungeon and exclusive new items to be found *Including quick save function for maximum portability