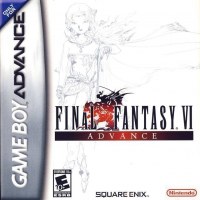 We buy for: £40.05
Sell Nintendo Gameboy Advance Games. Get Cash for Final Fantasy VI. Originally released for the Super Nintendo in Japan in 1994, now the acclaimed FINAL FANTASY VI ADVANCE can be yours wherever you go, as the newly translated RPG classic comes to Game Boy Advance with improved graphics and sound – as well as a host of all-new features! True to form, FINAL FANTASY VI ADVANCE is independent of other Final Fantasy episodes. However, players will encounter compelling similarities as they meet complex new characters with whom they will embark on spellbinding adventures. The story is set in a mysterious world governed by an evil dictatorship known as the Gestahlian Empire. ‘The Empire’ is determined to strengthen its domination of the world by harnessing the power of the Espers (powerful magical creatures) and using them as weapons. Endangered rival sovereigns, brave rebels and a handful of outcasts must now unite forces to stop the Empire fulfilling its ambition. The story begins with a treasure hunter called Locke and an amnesiac magician called Terra, who are forced to flee from the Empire. As the game plots its course, Locke and Terra will encounter a large cast of diverse characters, all of whom assume a crucial role in freeing the world. With many more options to customise your battles and a larger cast of playable characters than any FINAL FANTASY game before it, this sixth instalment in the seminal series is the kind of game that will take you on a thrilling adventure with something new to discover at every junction… •More than a dozen playable protagonists •Four new Espers: Leviathan, Gilgamesh, Cactuar, and Diabolos •New, improved English translation and first official translation in other European languages •Three new spells: Flood, Valor and Gravija •Features an all-new dungeon including the secret boss Kaiser Dragon, a terrifying monster removed from the original game in the final stages of development •Unlockable music player and bestiary with details on all the game’s monsters