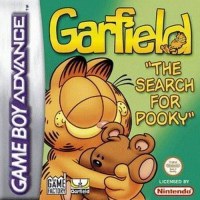 Garfield The Search For Pooky

We buy for: £2.10
Sell Nintendo Gameboy Advance Games. Get Cash for Garfield The Search For Pooky. The search for Pooky will take Garfield through his most known locales, he will meet the other characters (like Jon, Odie, Arlene, etc.), and of course encounter typical Garfield elements like spiders, food, mice, dogs, etc. During his search Garfield will inevitably eat food – and lots of it of course. In the game food will also represent energy. The more food Garfield eats, the more energy he has to do extraordinary moves. A level plays like a sideway scrolling platform game, though some levels will also scroll up and down to span a larger vertical area. Garfield moves from one side of the screen towards the other and must pick up food and other goodies on the way. At the same time all sorts of obstacles will have to be avoided, such as web spinning spiders, “happy Odie” rushing towards Garfield, bad food, annoying kids, angry pit-bulls, and more. Key Features * 6 unique locations from Garfield's well-known universe and 2 levels of difficulty, with most unraveling, hidden bonus mini-games. * 12 levels wrap you up in an enticing story each with unique game play (watch out for the hidden level)... * Each level differs and enables the young game to play as a sideway scrolling platform game or as the traditional up & down scrolling option to view a larger vertical area. * The game retains the true graphic style of the Garfield cartoons as you meet you interact with him and his best friends in this animated game. * Fall over laughing at Garfield's antics with the story & dialog written with the humor that we have come to love with the Garfield cartoons. * Attractive and intuitive user interface