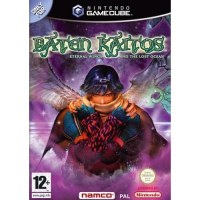 We buy for: £37.24
Sell Gamecube Games. Get Cash for Baten Kaitos. Baten Kaitos Eternal Wings and the Lost Ocean revolutionises the role playing genre, by combining a fast-paced and innovative Magnus battle system with beautifully rendered backgrounds and breathtaking game-play. Players are thrust into an outlandish world of floating islands, where the residents have all evolved wings to survive. The adventure follows Kalas and his companions as they search for five Magnus cards, which hold the soul of an ancient and dangerous god called Malpercio. However they are not alone in this quest; dark forces are also seeking the hidden cards in order to return Malpercio to the world. This game has breathtaking in-game graphics and effects and beautifully rendered backgrounds which are filled with subtle animations, creating a rich and lively environment. While playing, gamers will be wowed by amazing spell effects, awe-inspiring cut-scenes and terrifying monsters.