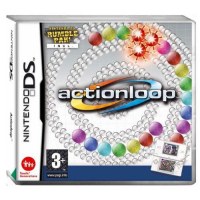 We buy for: £1.76
Sell Nintendo DS Games. Get Cash for Actionloop. Puzzle and action games clash in the magnetically compulsive Actionloop! You'll need to think on your feet as a chain of multicoloured marbles rolls endlessly towards you. If they reach the centre, it's all over, so you must match the same colours together to make them disappear, by flicking marbles from a launcher in the middle of the track - simply by using the DS stylus. Luckily, like-coloured marbles are magnetic, so you can create massive chain reactions and give yourself a few seconds of valuable breathing room - until a rocket ship arrives and starts pushing the marbles even faster! Three game modes offer plenty of variety: a frantic Challenge mode, a Quest mode with tons of different tracks and new twists, and a more sedate Puzzle mode. Plus, you can go head-to-head with a friend (using just one game card) and employ sneaky power-ups like smokescreens that can be disposed of by blowing into the microphone! Features: From the makers of Polarium and Polarium Advance. Simply flick the stylus to launch marbles and match up magnetically-attracted colours. Options for right- or left-handed play, using the stylus or +Control Pad. Spice up gameplay with five different power-ups in Challenge and Versus modes. Use power-ups to stop time, slow it down or reverse the course of marbles. Play with a friend in Versus mode using Single- or Multi-Card Download Play. Wirelessly send a demo of Actionloop to a friend's Nintendo DS. Use Actionloop to unlock new tiles and stages in Polarium Advance. Compatible with the Nintendo DS Rumble Pak.