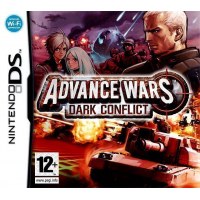 We buy for: £3.05
Sell Nintendo DS Games. Get Cash for Advance Wars Dark Confict. In a world ravaged by a domino effect of catastrophic events, those lucky enough to survive are divided into warring factions fighting to drive the direction of a new civilization. Meteor storms, earthquakes and tidal waves devastate the Earth, causing 90 percent of the world's population to perish. The sky has been blocked out by ash, yielding little sunlight. The battle for control of the new world rages in scorched wastelands and ruined cities. While some are fighting for power, others fight for those who can't defend themselves and still others are battling to finish a mission interrupted by the calamity. In this new world, a different breed of Commanding Officer emerges. Gone are series mainstays Max, Nell, Andy, Grit, Drake - all of them lost in the apocalypse. Instead of falling back on battle-changing Super CO Powers, this new generation of Commanding Officer must rely on pure military strategy and guile to overcome rogue enemies who have nothing left to lose. Advance Wars: Dark Conflict features intuitive but challenging strategy gameplay that will test players' mettle through a deep Story Mode and more than 100 Free Battle maps. In addition to mainstays of the Advance Wars military, new units such as the Motorbike and Flare make their debuts. For the first time, you'll be able to battle and trade your homemade maps via Nintendo Wi-Fi Connection. Through the Voice Chat feature, you'll be able to talk to the friend you're playing against. Combining online play with new features, new units and new tactics, Advance Wars: Dark Conflict takes the strategy experience to never before seen heights. * Within Story Mode, players can play through an additional 38 Trial stages. Although independent of the Story Mode, the Trial stages add much to the gameplay challenge and depth. * New strategies also emerge by way of the Command Zone. For the first time, a Commanding Officer can enter one of the units, and by doing this, he or she creates a Command Zone. The statistics of allied troops within this zone increase. * Construction becomes liberated! Advance Wars: Dark Conflict gives players more control and freedom when it comes to factories and supply points. An army can now build supply ports and airstrips on the battlefield. Aircraft Carriers don't just refuel planes, they produce them. * Create your own maps and share them with your friends or upload them to Nintendo Wi-Fi Connection.