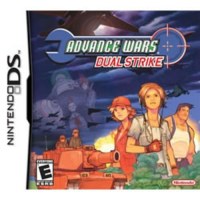 We buy for: £5.50
Sell Nintendo DS Games. Get Cash for Advance Wars Dual Strike. The Game Boy Advance strategy sensation comes to Nintendo DS! Confront the deadly Black Hole Army's invading forces, in tactical battles that play out across both of the DS' screens. New Commanding Officers join familiar faces - with a total of nine new characters, now you possess even more options in battle. Taking full advantage of the DS' capabilities, there are two kinds of battle, Normal and DS. In Normal mode the battle map appears on the touch screen while you use the top screen to keep tabs on key information about your units and your enemies! DS Battle mode lets you take a more all-encompassing view, using both screens to display the action as you and Black Hole clash in mortal combat. This means you can oversee two separate battles at the same time, or move troops from one screen to the other. With tanks, fighter planes and rocket launcher-carrying troops to command, you've more firepower at your disposal than ever before - but the enemy isn't lacking either... The formidable single player campaign will test even the shrewdest of military strategists, while the real-time combat mode provides immediate action if you want a break from the turn-based turmoil. You can also take on your friends across dozens of new maps, as well as several classics from previous Advance Wars games. Up to eight players can battle one another from just one Game Card, using the game-sharing ability of the DS. And with the Map Edit mode you can even use the touch screen and stylus to create your own maps, then send them on to friends!