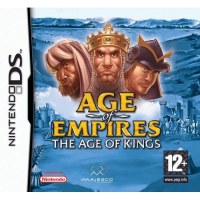 Age of Empires The Age of Kings

We buy for: £1.32
Sell Nintendo DS Games. Get Cash for Age of Empires The Age of Kings. Wage war on your Nintendo DS with a perfectly recreated handheld version of one of the bestselling PC real-time strategy (RTS) games of all time. Command different civilisations - including ancient Britons and Japanese samurai - and battle through history from the Dark Ages through the Middle Ages with the sole intent of dominating the world. Age of Empires: The Age of Kings condenses the classic RTS into highly playable form on DS with new turn-based gameplay, numerous classes of historically accurate warriors to control and 'Hero' units like Robin Hood and Genghis Khan to lead them. As well as warring, you'll also have to construct towns for your people, mines to dig for resources and even universities where new skills can be learnt such as chemistry, ballistics and spying skills. Plus, Age of Empires also includes a four-player multiplayer mode for wireless battles with friends. *Five different civilisations to command: Britons, Franks, Mongols, Saracens and Japanese. *Take control of special 'Hero' units like Richard the Lionheart, Robin Hood, Joan of Arc and Genghis Khan, among others, who have special powers affecting the entire battlefield. *More than 45 unit types to control, from bowmen and monks to hand cannoneers, mercenaries and samurai. *Research more than 50 different techniques like chemistry, ballistics, siege craft and spying. *A new Combat Advisor provides advice on campaign strategies and an indication of how the battle will go. *Gain Empire Points to unlock maps and units and improve Emperor Rank. *Original music and sound effects from the bestselling PC version.