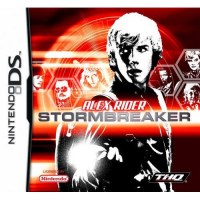 We buy for: £0.25
Sell Nintendo DS Games. Get Cash for Alex Rider Stormbreaker. The schoolboy hero of Anthony Horowitz's best-selling novels - and now a blockbuster movie - is about to arrive on a handheld near you! British teenage super-spy Alex Rider is the Stormbreaker; an ordinary 14 year old who is asked to work for MI6, the British Special Operations agency, when his uncle – a spy himself - is murdered by terrorists. Alex must infiltrate the headquarters of mysterious billionaire Darrius Sayle and investigate him and his sinister business partners… Stormbreaker seamlessly melds a range of different gamestyles to provide one of the most variety packed adventures you'll ever embark on. Stealth sections, where you avoid guards by hiding in darkness are combined with all-out action as you tackle your opponents using powerful martial arts techniques and engage in intense racing sequences. As well as the main challenges, there are mini-games to keep you busy too - you may find yourself parachuting, scuba diving, or even playing the odd frame of snooker! Taking full advantage of the DS' features, the lower screen acts as a map, so you can always keep your bearings, while the action takes place in the top display. There are also puzzles that make use of the DS touch screen control, so for instance you can rotate a lockpicking device left and right in order to progress past locked doors. There's a storm coming; Alex Rider is about to discover that you're never too young to die… · Enter the world of Stormbreaker - levels include Ian Rider's house, the breaker's yard, MI6's secret Liverpool Street HQ, MI6's training facilities and Darius Sayle's complex. · Gameplay includes a blend of combat action, stealth missions, and intense vehicular races · Receive spy gadgets from Smithers that will aid you in combat, navigation, and the ability to unlock special mini-games. · Hone your spy skills at MI6's top training camp. · Includes the likenesses of many of the stars from the film, which features Mickey Rourke, Ewan McGregor, Alicia Silverstone, Robbie Coltrane and UK comedian Jimmy Carr