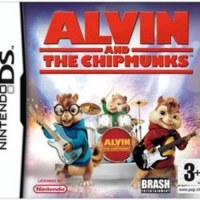 We buy for: £1.05
Sell Nintendo DS Games. Get Cash for Alvin and the Chipmunks. Rock out with the Chipmunks this Christmas! Inspired by the 1 kids musical group of all time, Alvin and the Chipmunks makes its debut on PlayStation2, Nintendo DS and Wii, and PC. Players will play as the Chipmunks as they rock their way to the top of the charts by winning the ultimate battle of the bands contest, Rockathonapalooza. Alvin & The Chipmunks will feature fun music gameplay, popular licensed songs spanning many different eras, and a variety of play modes including multiplayer and more. Get ready to rock until you drop with Alvin and the Chipmunks in a brand new music-inspired adventure! * Live out rock stardom dreams with the power trio of Alvin, Simon and Theodore! * Sing and play along to a deep soundtrack featuring popular licensed songs from many different era s including some of the original Chipmunk classics * Comical storyline surrounding the Chipmunk s universe * Challenge friends thru multiplayer including head to head mode * Various levels of difficulty will keep players of all ages engaged * DS version features exclusive mini-game content