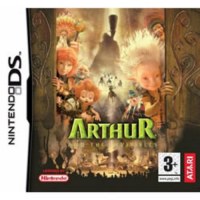 We buy for:
Sell Nintendo DS Games. Get Cash for Arthur and the Invisibles. Directly inspired by world famous film director and writer Luc Besson's upcoming animated film of the same name, the Arthur and the Minimoys game will follow the film's storyline and feature eye-popping graphics and technical innovations. By taking a very unique approach to its presentation of the Arthur universe and utilising the unique features of the DS hardware, the Nintendo DS version of Arthur and the Minimoys is a different kind of game to the versions for other consoles and PC. Arthur and the Minimoys for DS gleefully portrays the magical world of Arthur through a series of original and entertaining micro games and with an absorbing 'virtual pet simulator' where players are responsible for caring for and breeding 'Mul mull', small, fluffy, flying creatures found in abundance in the world of Arthur. * - 3 game modes for players to compete in * - Large selection of unlockable characters, each with their own series of micro games set in different environments. * - 90 varied micro games with tasks including kill the evil mosquito, protect the vulnerable village, and find the heroic Arthur as well as challenging boss stages to pit reflexes against. * - Players can unlock training modes as they play through the Challenge Mode allowing practise in training mode on the more difficult micro games. * - Unlockable objects awarded in the Challenge Mode can be used to amuse and comfort Mul mul or shared via WiFi. * - Players can breed an entire dynasty of Mul mul should they wish, but a poorly looked after Mul mul will break things if it's not happy, eventually escaping its cage and disappearing forever! * - Mul mul babies take on characteristics and Experience Points from their parents, allowing players to create rich, interesting and long family lineages of impeccably behaved Mul mul. * - A gentle blow of air on the microphone attracts the undivided attention of your Mul mul. * - Pet your Mul mul with the stylus, but be gentle - slap too hard and they might get upset. * - Mul mul can be bred via WiFi if players find others willing to breed with - but be careful not to cheat on the other, or players will lose affinity points.