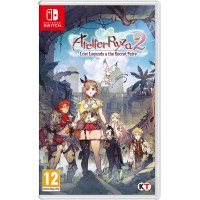 We buy for: £16.89
Sell Switch Games. Get Cash for Atelier Ryza 2 Lost Legends The Secret Fairy. Ryza returns in the sequel to the worldwide JRPG phenomenon Atelier Ryza, in Atelier Ryza 2: Lost Legends & The Secret Fairy. Set three years after the conclusion of the first game, Ryza 2 sees our plucky adventurer set out on an all-new escapade, joined by a cast of both old and new friends. Soon, an important decision must be made… And it's a decision that will spark the adventure of a lifetime. Features: * Join Ryza and her fun-loving group of mischievous friends, as they set out on a brand-new adventure to the royal capital of Ashra-Am Baird. Explore the ancient ruins while seeking the truth behind the mystery of the Lost legends. * Uncover the secrets of the mysterious fairy, fi. * Adventure through vibrant environments in exciting new ways. Newfound techniques allow Ryza to swim, climb, swing and ride creatures to navigate her environments, all of which are new to the Atelier series. * Ryza's swimming ability will not only allow her to find a wealth of Aquatic materials for synthesis, but also find a unique underwater dungeon.