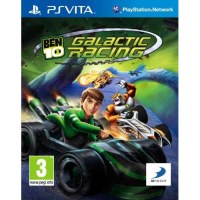 We buy for: £12.49
Sell Vita Games. Get Cash for Ben 10 Galactic Racing. In BEN 10 Galactic Racing, the first and only racing game based on the popular BEN 10 television series on Cartoon Network, fans will enjoy a BEN 10 multiplayer experience like never before in a galactic grand prix filled with surprises at every turn. BEN 10 Galactic Racing features over 25 exhilarating and challenging tracks that change route mid-race and is spread across five massive planets from the BEN 10 universe. Play as either Ben, Kevin or choose from 13 fan-favourite aliens and equip them in more than 30 unique karts. BEN 10 Galactic Racing presents the ultimate racing experience this fall, where every character has a special ability to utilize on the race track and even Ben can transform into different aliens mid-race! Features: * Enhanced to Showcase the Interactivity Features of PlayStation Vita system! o Six-axis motion sensors allow the player to steer their kart in any direction by tilting the device. o Players can use Front and Rear touch panels to perform a number of mid-air stunts, flips, and tricks that will increase their chances of winning the race. o With your friends via ad-hoc multiplayer, pit Ben or Kevin in a race against any of the 13 fan-favourite aliens in the PlayStation Vita system game for up to four players. * Become a Champion in a Galactic Grand Prix Race! – Select a character and compete against opponents in a circuit of action-packed, high-speed races in increasingly challenging tracks filled with offensive and defensive pick-ups, where players earn awards along the way. * Enjoy a BEN 10 Multiplayer Experience Like Never Before – The first BEN 10 racing game ever will allow players to compete against up to three friends to become the champion racer.