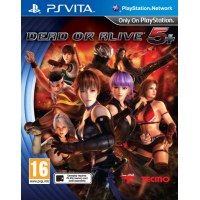 We buy for: £20.74
Sell Vita Games. Get Cash for Dead or Alive 5+. Dead or Alive 5 Plus takes the signature fighting style of the popular DOA series, combined with the stunning graphics and new martial arts techniques of the recent console release, and brings it to the Vita with all-new system-specific features. In Dead Or Alive 5 Plus, players will take on the roles of the cast of Dead or Alive fighters in an intense, action-packed brawler, set in visually striking locations from around the world. The famed DOA hand-to-hand combat returns, supported by 3D stages that update the series’ characteristic style with a fresh look and feel. FEATURES: • Intense DOA Fighting: DEAD OR ALIVE 5 PLUS expands the signature DOA fighting style with a variety of deadly martial arts techniques and styles. • Realistic and Sensual Graphics: Characters come alive with a new visual style combining stunning realism with a warm, naturalistic feel that conveys every facet of each character—from raw power to sleek sensuality. And now you can interact directly with the characters using the Vita’s touchscreens! • Dream Lineup: The full cast of DOA fighters is at your fingertips, including Ryu Hayabusa, Hayate, Ayane, Kasumi, Hitomi, Bayman, Christie, Lei Fang, Zack, Kokoro, Bass, Rig, Jann Lee, Helena, Lisa, Brad Wong, Eliot, Tina and more. • Dynamic Interactive 3D Stages: More than a backdrop, spectacular locations from around the world provide a changing and interactive arena for deadly battles. • Devastating Finishing Moves: Use power blows to interactively trigger the Danger Zone of a stage, including crashing cars, collapsing glaciers, and an exploding oil rig—distract your opponents or drive them into danger.