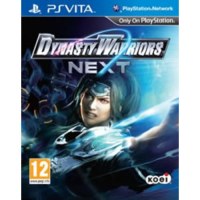 We buy for: £10.84
Sell Vita Games. Get Cash for Dynasty Warriors Next. Dynasty Warriors Next, the brand new instalment built for the PS VITA, will allow players to use PS VITA’s breakthrough touch pad, rear touch pad and motion sensor for intuitive controls to fight their battles, as well as connect with others and enjoy an epic experience. The main game features include: Fusion of button controls with touch controls, such as multi-touch screen and rear touch panel sensor (6 axis detection). Combine explosive action with tactical aspects! Touch or shake to use the new “Speed Musou” and hit your enemies with powerful attacks. Touch the screen to perform a “Direct Break” and capture bases in the blink of an eye. You can also touch the map directly, without interrupting the action, to direct your subordinates with “Straight Commands” The impressive visual effects will help you delve deep into the Warriors’ world. Get a taste of life-like duels and experience a plethora of special missions using a variety of touch and sensor controls. Enjoy battles overflowing with tension in truly immersive, cinematic action. Communication enhanced by local play and GPS: Connect with other players and use GPS-related positioning to enjoy continuous social interaction. Use PlayStation Vita’s Live Area, the new “Conquest Mode” (supporting WiFi and 3G) and the new 4 player ad-hoc multi-player “Coalition Mode” for a rich multiplayer experience. Dynasty Warriors NEXT also sees the return of fan favourite ‘Edit Mode, were players can create and customise their own warriors! Enjoy intense battle action with more than 65 playable characters!