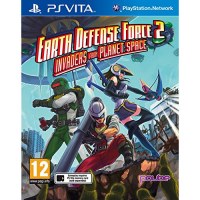 We buy for: £14.14
Sell Vita Games. Get Cash for Earth Defense Force 2: Invaders from Planet Space. Earth Defense Force 2: Invaders from Planet Space sends the player into high-flying, explosive battles against giant monsters with a classic kaiju/b-movie aesthetic! Praised as the 'best game in the series', Invaders from Planet Space takes the battle online with up to four player co-op and the addition of the unique Air Raider class! Call in huge air strikes or mount the offensive in heavily armoured vehicles for a new way to squash the hordes of alien bugs! Features: • Three unique classes: ranger, pale wing, and the all-new air raider! • Take the fight online with three friends in co-op action! • Utilise hundreds of weapons, gadgets, and vehicles, from rifles and grenades to tanks and helicopters! • Stockpile weapons in your base then customise your load-out for the next mission! • Fight through nearly 80 unique missions in single player or online coop! • Call in huge airstrikes or command armoured vehicles like tanks and troop transport!