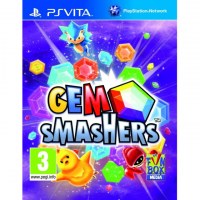 We buy for:
Gem Smashers is a casual puzzle game based upon a successful Game-Boy Advanced version released in 2003, the Gem Smasher concept has now been re-created and polished to fit a modern market. The game contains a wide array of features, some of which are: • 3 different playable characters, each with its unique speed, bounce and style. • 50+ different bonuses that result in everything from bonus points to game changing mechanics. • STORY MODE: 9 different worlds to explore and play. • Overcome the levels and defeat the bosses. • ARCADE MODE: New locations, levels, and high speed gameplay. • BATTLE MODE: Challenge your friends and see who truly has mastered the game. • SPECIAL MODES: Earn and unlock additional game modes and extra features. • A total of over 200 game levels. • Impressive special effects that utilize the latest generation of consoles to their fullest. • Several animated cut-scenes that introduce characters, locations and story. • Adaptive sound and background themes that change depending on levels and locations. • Universal graphical appeal comparable to Pixar animated movies.
VT34
Check out what our customers say Click on any logo to view feedback
Trustpilot