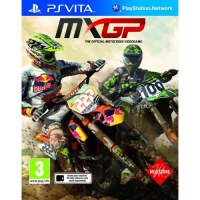 We buy for: £10.34
Sell Vita Games. Get Cash for MXGP: The Official Motorcross Videogame. MXGP: The Official Motocross Videogame is the official game of the World Motocross Championship – authentically simulating the emotion, the mud, the amazing jumps and fierce competition of this incredible sport. Including a redesigned career mode, MXGP features all the riders, teams, bikes and rules from the official MXGP 2013 calendar. Experience the intensity of these adrenaline-fuelled races first hand, as a new generation of riders fight it out, to claim the World Championship title race by race. • OFFICIAL LICENCE. 60 riders, 60 bikes, 14 tracks and rules from the official MX1 and MX2 2013 FIM Motocross World Championship. • REALISM. It’s “The Game About Motocross” and this is injected into all aspects of the game: realistic bike physics, rider motion-captured animations, dirt systems and a new terrain deformation system. • BE A MOTOCROSS RIDER. Live the real life of a motocross rider with the career mode: sign a contract with Official MX Teams depending on your results and try to become the new champion. • TRACKS. All the tracks are completely new and loyal to the real ones: realistic illumination, 3D environments, fan, balloon and animated flags – show the real Motocross World!