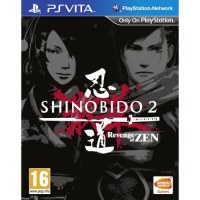 We buy for:
Shinobido 2 Revenge of Zen is the sequel to the previous opus, featuring the series’ trademark stealth gameplay with the addition of new stylish ninja moves and a dynamic storyline. The story is set six months after the events of Shinobido: Way of the Ninja, with the Utakata region once again at the centre of the storm and embroiled in a civil war involving the mysterious Magic Mirror. Players will take the role of Zen, a man who has suffered betrayal at the hands of his companions and the loss of his home. Saved by the Asuka Ninja clan of Utakata, Zen makes up his mind to live as a ninja and begins a perilous journey in search of revenge. The Shinobido series takes place in feudal Japan and is based on stealth action gameplay. It is developed by Acquire, the studio known for creating the “Tenchu” and “Way of the Samurai” games. The first Shinobido game, subtitled Way of the Ninja, was released in Europe in 2006 for PlayStation 2. The subsequent title, Shinobido: Tales of the Ninja, was released in Europe in 2007 for PSP and included a multiplayer mode. Features: • Dynamic Storyline: The player can interact with three factions with different choices affecting the power balance between the factions and resulting in diverging storylines. • Stealth action gameplay for a master assassin: Employ a variety of deadly finishing moves which vary according to the location. Activate the Zankoku for bullet-time action and use the Ninja Flying ability to freely explore the environments. • New “near” network features: Boost your inventory by receiving gift items from other players using the PlayStation Vita near feature. • Original PS Vita rear touch panel gameplay features: When Zen senses the presence of an enemy and the Caution icon appears, use the touch panel to look in that direction. In the first person viewer mode, use the rear panel to target and launch long range weapons at enemies.
VT32
Check out what our customers say
Trustpilot