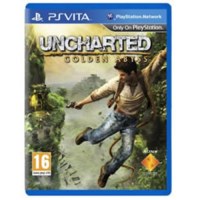 We buy for:
Uncover the dark secret of a lost Spanish expedition massacred 400 years ago deep in Central America – and join legendary fortune hunter Nathan Drake in a brand new epic adventure for PlayStation Vita. Surrounded by temples, ruins and forgotten legends, Nathan finds himself caught in the middle of a bitter rivalry between old friend Jason Dante and Marissa Chase, granddaughter of the eminent archaeologist called in to investigate the site – who has mysteriously vanished without a trace. • Immerse yourself in an epic storyline enhanced by intuitive PS Vita controls: unravel the mysteries of the Golden Abyss using the touchscreen, rear touch pad and rear camera to examine artefacts and solve puzzles. • Join Nathan Drake in a full Uncharted adventure for the first time on a portable gaming system, brought to life through stunning environments, an engaging cast of characters and a cinematic storyline. • Explore forgotten ruins and hidden caverns, infiltrate deadly guerrilla camps and work together with Nathan’s companions to solve puzzles and reach hidden areas.
Check out what our customers say
Trustpilot