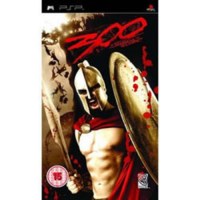 We buy for: £0.25
Sell PSP Games. Get Cash for 300 March to Glory. Live the epic adventure inspired by the powerful graphic novel and film, 300. As King Leonidas, you will lead 300 Spartan warriors in a heroic fight to the death against Xerxes' massive Persian army. The odds are stacked against you, but through strategy, and skill you can save all of Greece – and change history forever. Features: Fight for glory with the upgradeable weapons, armor and battle skills of the Spartans from the film 300. Unleash the full wrath of your army with the ultimate Spartan battle formation – The Phalanx. Decapitate, dismember, and disembowel your enemies in bloodthirsty sword-and-spear combat.