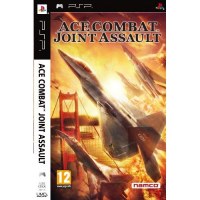 We buy for: £4.51
Sell PSP Games. Get Cash for Ace Combat: Joint Assault. The latest installment of the greatest air combat game series soars onto the PSP system with an arsenal full of ground breaking new features! ACE COMBAT JOINT ASSAULT pushes the PSP system's capacity to its limit with robust online gameplay, CO-OP enabled campaign mode, new strategic AI system and more! * Real world setting! Set in the skies over familiar real-world locations including Tokyo, London, San Francisco and more for the first time in the series, players will step into the shoes of allied pilots and set out on numerous original missions to obliterate the enemy in fierce tactical dogfights. * Air combat intensified! With the new “Enhanced Combat View” system, enemies and combat is shown closer than ever before. Experience the heightened sense of speed and intensity of combat! * Fly authentic licensed aircraft! Jump in the cockpits of more than 40 state of the art combat aircraft and tear the skies apart with great ease! * Cooperate and complete globally! Engage in infrastructure supported wireless online CO-OP gameplay up to 4 players or VS battle with up to 8 players! Complete all the missions in campaign mode with CO-OP up to 4 players! The new “Joint Assault Mission System” enables you to work through different maps simultaneously and make an effect on each others’ tactical situation, allowing the missions to evolve in multiple branches. You can also prove your supremacy in 8 player wireless online Vs mode. The game supports Ad hoc Party!