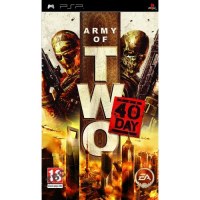 Army of Two The 40th Day

We buy for: £0.50
Sell PSP Games. Get Cash for Army of Two The 40th Day. Fight as a two-man team to survive and prevail. When a man-made disaster of epic proportions strikes Shanghai, China, Rios and Salem find themselves right in the middle of it all. Fortunately for you, you've got a bigger playbook of features and a new arsenal of co-op moves that either player can perform at any time, opening up fresh strategies and choices for both players. You've also got the tools you need to help the Army of Two fight and prevail with an incredibly deep, advanced weapon customisation and upgrade system. The game's multiplayer has also been rebuilt from the ground up using proven client-server technology for the best experience possible. The Army of Two is back and better than ever! * The Evolution of Co-Op: Army Of Two: The 40th Day has been built from the ground up with a focus on an incredible cooperative experience. The result is a bigger, better, more organic and immersive co-op experience that lets you put your best two-man tactics to use whenever and wherever you want. * Survive the Disaster: A carefully orchestrated series of mysterious catastrophes is dragging Shanghai, China to the brink of ruin, and now the Army of Two must fight their way through ravaged city districts as they try to beat the odds and uncover the secret of the 40th Day. * Never-Before-Seen Weapon Customisation: Blaze into battle with more weapons - and even more upgrades per weapon - than in the original game, while the action reaches new levels with strategic gunplay: the weapon you choose and customise defines how you play the game. Will you go for the barely controlled chaos of the aggro focused weapon or design a silent and deadly flanking weapon? The choice is yours!