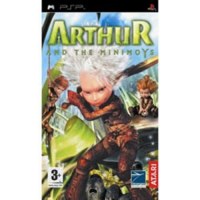 We buy for: £1.05
Sell PSP Games. Get Cash for Arthur and the Invisibles. Directly inspired by world famous film director and writer Luc Besson's upcoming animated film of the same name, the Arthur and the Minimoys game will follow the film's storyline and feature eye-popping graphics and technical innovations. The game allows players to relive the fantastic adventure of young Arthur and his two pals, princess Selenia and her brother Bétamèche, in their mission to save the Minimoys' world from destruction. Set to time with The Weinstein Company theatrical release of the movie in North America, Arthur and the Minimoys game is set for release later this year.