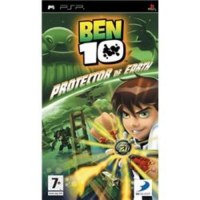 We buy for: £0.50
Sell PSP Games. Get Cash for Ben 10 Protector of Earth. An inter-dimensional crisis threatens to swallow the Earth into limitless darkness and Ben Tennyson suddenly finds that his alien powers have been stolen! As Ben and his family set out to recapture the source of his amazing abilities, they encounter armies of otherworldly minions and uncover a plot to suck the Earth into the Null Void. Now you can join the Tennyson's on an adventure across the United States to recover the lost pieces of the Omnitrix while battling villains from the show, including Kevin 11, Dr. Animo and more. In this time of chaos, it's up to you to find some answers and save the Earth from ultimate destruction! * Non-stop action featuring the favourite characters from the hit Cartoon Network show. * Gamers will experience the challenge of making quick decisions like which alien to fight with and which attack combos to employ for best results. * The humour of Ben Tennyson will be fully apparent in the interactive game. * Player will gain full immersion into the Ben 10 world and control the flow and action of their favourite superhero!