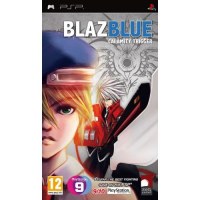 We buy for: £2.10
Sell PSP Games. Get Cash for BlazBlue Calamity Trigger. BlazBlue: Calamity Trigger Portable has been painstakingly recreated for PSP, retaining every character, frame of animation and all the modes of the home console versions (Arcade, Versus, Score Attack, Training, and Story). In addition, two new modes, Shop' and Legion' will be included. Shop will allow players to unlock exclusive bonuses like characters and illustrations, while Legion offers a single-player strategy game, which sees you building an army of BlazBlue characters in order to capture territory against the enemy. Twelve unique combatants to choose from including 8 unlimited characters compared to the console version.