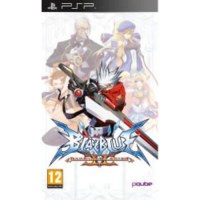 We buy for: £4.51
Sell PSP Games. Get Cash for BlazBlue Continuum Shift II. BlazBlue is the perfect fit for fight fans on the move. BlazBlue's unique four button fighting system, accessible gameplay and beginner modes, and wealth of single player content make it better suited to handheld play that any other fighting game series. 2D fighter, boasting stunning artwork, fluid animation and an accessible and fast-paced fighting system. 18 characters each with their own unique 'Drives' -special powers that give BlazBlue it's trademark depth and spectacle. BlazBlue boasts a wealth of solo content for players, beyond standard Arcade and Score attack modes.