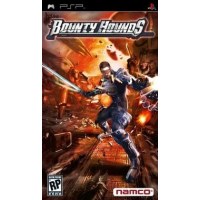 We buy for: £2.10
Sell PSP Games. Get Cash for Bounty Hounds. Hundreds of years into the future, Terraforming has made it possible for humans to colonize other planets - and thus for humanity to encounter Extraterrestrial Intelligence. War ensued over the acquisition and conquest of planets, which led to employment of mercenaries who would scout planets deemed fit for habitation. The band of these ruthless mercenaries was called Bounty Hounds. As Maximillian, the leader of Bounty Hounds, your mission is to battle different alien species spread across planets. With a variety of new weapons and items as well as WiFi play to match up against a friend, Bounty Hounds delivers an exciting weapon-based action adventure for PSP® system gamers. Battle Your Way with Double Weapons: Wield two separate weapons - one in your right, another in your left. Two categories of weapons allow you to use melee weapons for close combat and ballistic weapons for long range combat.