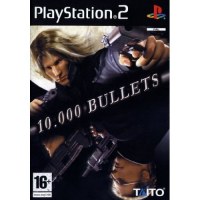 We buy for: £45.49
Sell PS2 Games. Get Cash for 10000 Bullets. Enter the world of Crow and Judas, professional hit men who handle all the dirty work for the Tonio Family - a powerful crime syndicate based in Rome. Having lost his mother at a young age, the aimless Crow was taken in by Papa Tonio and raised to serve the syndicate as one of its members. For his entire life Crow had only one goal in mind - to avenge his mother's death. He also possessed a secret power, the power of 'Gunslinger' who could foresee the future. With his powers and determination for revenge, Crow matured to became the finest hit man in town. Though understandably a loner, Crow eventually found himself a friend in Judas, a fugitive from France. Judas taught Crow how to manipulate the trigger like a pro.