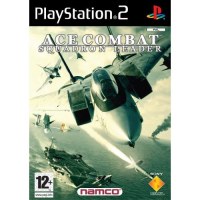 We buy for: £0.75
Sell PS2 Games. Get Cash for Ace Combat Squadron Leader. It is 23 September 2010, and on a small island in the ocean that divides the global superpowers of Osen and Yuktobania, an entire military base is on red alert. Ace Combat 5 features a multitude of gameplay modes and offers players the opportunity to fly some of the most advanced aircraft ever built with over 50 licensed, playable planes and about 30 wide ranging missions. Taking the controls of these aircraft, players will be pushed to limits , diving down canyons, flying through mountain passes and bursting above the clouds as they avoid missiles and hunt the enemy. One of the new exciting new features in the game is Wingman Command, which allows players to provide in-flight instructions to their squadron while carrying out group attacks, you can listen in on conversation which has been added to the realism and intensity of battles.