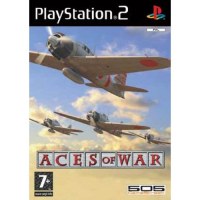 We buy for: £4.02
Sell PS2 Games. Get Cash for Aces of War. Have you ever asked yourself what would have happened if you had personally taken part in one of the most important battles in the history of aviation? In Aces of War, you take control of 40 different types of aircraft in an attempt to change the course of events. Avoid enemy fire, bomb enemy ships and attack enemy fighters, then watch the replays of your heroic actions just as if you were part of a war blockbuster. And for some real dogfight action you can try shooting your pals out of the sky in the great VS mode, or you can let them be your wingmen in the cooperative mode.