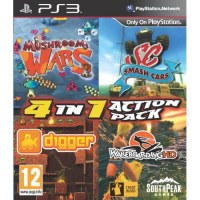 We buy for: £3.58
Sell PS3 Games. Get Cash for 4 in 1 Action Pack. 4 in 1 Action Pack is a collection of four amazing PlayStation 3 titles, including: WAKEBOARDING HD: Grab your board and hold on tight! Wakeboarding HD drops players into 20 high-speed, water-filled arcade levels to manoeuvre through tracks, perform high-flying tricks, collect bonuses and avoid dangers from exploding mines to bloodthirsty sharks. Show your skills and wreak havoc as the tropical paradise resort transforms into an action-packed extreme playground. MUSHROOM WARS: A fast-paced, accessible single and multiplayer RTS game with a quaint visual style that brings skirmish gameplay to the forefront. Battles of opposing tribes of Mushroom armies take place in close-quarters maps using simple, straight-forward controls against AI or friends. Short campaigns challenge players to take control of key strategic points. Conquest battles require complete annihilation of opponents. DIGGER HD: A remake of the classic PC game from the early 1980s, has received a major facelift for the new millennium, while staying true to its classic gameplay. Players control a little construction vehicle that must make its way through an underground maze. Gamers dig through the dirt horizontally and vertically to create their own path while collecting power-ups, jewels, coins and other bonuses while avoiding the pursuing monsters. SMASH CARS: A tricked-out single or multiplayer online RC toy car racing game. With real-time physics simulation and vehicle customization, players can twist and turn, grind and gear up, performing aerial tricks and stunts while racking up trophies and points as they race to the finish.