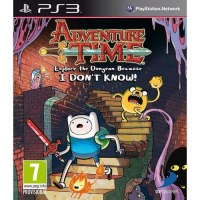 Adventure Time Explore the Dungeon Because I Don't Know

We buy for: £1.76
Sell PS3 Games. Get Cash for Adventure Time Explore the Dungeon Because I Don't Know. Adventure Time: Explore the Dungeon Because I Don't Know! is a brand new action game from the creative minds of Pendleton Ward and is the follow-up to the mathematical, algebraic, and radical success of last year's IGN Editors' Choice recipient Adventure Time: Hey Ice King! Why'd You Steal Our Garbage?!!. The adventure begins with a completely new storyline staged in the Land of Ooo as players help Princess Bubblegum save the Candy Kingdom by exploring the mysteries surrounding a massive Secret Royal Dungeon. In Adventure Time: Explore the Dungeon Because I Don't Know!, play as multiple fan-favourite characters from the show with up to four players including Finn, Jake, Marceline, Ice King, and more and showcase your best attack moves with special abilities and skills to defeat baddies throughout the dungeon. Features: * Oh My Glob! You can play as many of your favourite adventure time characters!: Experience the radical fun of Adventure Time by playing fan-favourite characters, each with unique moves and an arsenal of creative attacks. * Investigate and Conquer the Secret Royal Dungeon: Help Princess Bubblegum and fight your way through 100 floors of a massive dungeon, avoiding treacherous hazards and defeating menacing enemies and bosses from the Adventure Time show! * Brand New Storyline from Show Creator: Series creator Pendleton Ward teams up again with developer WayForward for the biggest Adventure Time experience yet in an offbeat, fun adventure for fans of all ages. * Voiceovers from the Original TV Cast: For the first time, characters from the show come to life with voiceover provided by the award-winning original TV cast. * Grab Your Friends for Multiplayer Fun: Play in single player or share the experience and fun of Adventure Time with your best buds in four player, co-operative multiplayer on consoles. * Become Stronger by Kicking Some Digital Bootays: Equip Tokens for awesome ability boosts and arm your characters with Sub-Weapons to complement your attacks against some of the baddest enemies throughout the dungeon like Gunter's Kitten, Goliad and Stormo, Ice King, and Gumball Guardians.