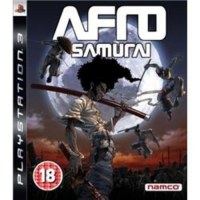 We buy for: £5.50
Sell PS3 Games. Get Cash for Afro Samurai. The Battle To Become 1 Begins! He who possesses the 1 Headband, will rule the world! Afro Samurai is the cutting edge game that delivers a new kind of cinematic game experience, a living episode that offers addictive, immersive and compelling gameplay that's literally dripping in style. Join Afro in his epic hunt for revenge to avenge the murder of his father by the current owner of the 1 Headband. Afro Samurai blends traditional Japanese culture, funky technology and hip hop to create a brutally fresh interactive experience. The hit, animated TV series now comes to life! * - Unparalleled Star Power - Samuel L. Jackson stars as the voice of Afro Samurai and * Ninja Ninja along with a musical score by RZA of Wu-Tang Clan fame and Chuy Gomez, * famous DJ and hip hop music expert * - Dynamic Character Movement - Afro interacts with anything and everything in the * environment in beautifully animated open world environments * - A Tale of Revenge - Afro Samurai follows the exploits of the original series and includes * new material and background for fans of the series and newcomers alike * - Blood is Beautiful - A striking art style, shading and texturing that give Afro Samurai a * truly unique look and feel * - Style and Rhythm - Innovative gameplay system where the music affects the enemy AI * and the tone of the gameplay * - "Elegant Violence" - A balanced experience between stylistic combat and acrobatic * platforming with the ability to dynamically slice and dismember enemies with ease