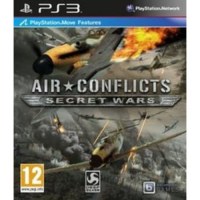 We buy for: £3.58
Sell PS3 Games. Get Cash for Air Conflicts Secret Wars. Air Conflicts: Secret Wars provides a diverse range of missions, including air space clearance operations, ground-based target bombardment, enemy convoy assaults, and reconnaissance, escort and patrol flights. After each successful mission players will be able to upgrade their flight capabilities, enhance their aircraft and select highly-skilled co-pilots. Air Conflicts: Secret Wars provides two unique control modes - arcade and simulation. The combat aircraft controls are simplified in arcade, whilst simulation offers a challenging, true-to-life control scheme. In addition to the solo campaign missions, Air Conflicts: Secret Wars also offers several multiplayer modes for up to eight players that can be played on a local network and online. Features: * More than 40 varied missions provide combat, stealth and exploratory game play. * Several multiplayer modes, local and via internet for up to four players. * Machine gun your enemies, dog fight, bomb ground targets and rocket ground troops and enemy vehicles. * Seven campaigns, each based upon a resistance movement of the second world war. * Action-packed game play delivers the excitement of aerial combat in a manner accessible to everyone. * Over twenty different landscapes, each individually detailed with period precision. * Pilot more than fifteen aircraft, in both World War One and World War Two settings.