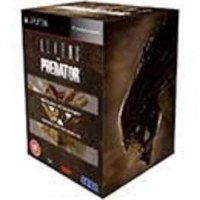 We buy for: £13.59
Sell PS3 Games. Get Cash for Aliens Vs Predator: Hunter Special Edition. The three most deadly predator species in the universe come together for a showdown: chest-bursting aliens, high-tech hunter Predators and well-armed human marines fight for survival against each other in the ultimate in scary first-person shooters, Aliens Vs Predator. Aliens Vs Predator updates the classic film-inspired action of the original game with state-of-the-art atmospheric visuals and all new features including groundbreaking and terrifying three-way multi-player. In online multi-player, and in the single-player campaign play as the Alien, able to scale any surface and kill with teeth, claws and tail; or as the Predator, with high-tech hunting camouflage, a master of the stealth kill; or as a Colonial Marine, with firepower and squad numbers to fight back against overwhelmingly lethal odds. A three-way fight for survival means epic and scary first-person action in Aliens Vs Predator.