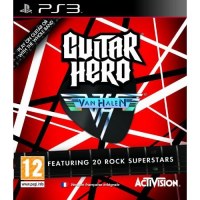 We buy for: £1.05
Sell PS3 Games. Get Cash for Guitar Hero: Van Halen Solus. It's time to prove you've got the swagger and showmanship to stand alongside these rock-n-roll legends. In Guitar Hero: Van Halen, you can live out the experience of performing as one of the biggest rock bands of all time. Guitar Hero: Van Halen lets you stand in the shoes of this Rock and Roll Hall of Fame band as you perform 25 epic Van Halen tracks, three signature Eddie Van Halen solos and 19 guest act tracks. Get the crowd roaring with your arena rock stylings on Van Halen hits like Jump, Hot for Teacher, Ain't Talkin' 'Bout Love and Dance the Night Away, as well as songs like Billy Idol's White Wedding, Foo Fighters' Best of You and Blink-182's First Date. Experience the excitement of playing as this ultimate party band as you rock out to dozens of enduring hits and prove you have the talent and the style to live up to the Van Halen legend. Game Features: * Live out the excitement of playing as the legendary band Van Halen * Perform an incredible arena rock set list that includes 25 Van Halen songs, three Eddie Van Halen signature solos and 19 songs from guest acts * Includes the Van Halen songs And the Cradle Will Rock, Atomic Punk, Beautiful Girls, Cathedral, Eruption, Everybody Wants Some!!, Feel Your Love Tonight and Hang 'Em High * Includes the Van Halen songs Hear About It Later, I'm the One, Ice Cream Man, Jamie's Cryin', Little Guitars, Loss of Control, Mean Street, Panama and Pretty Woman * Includes the Van Halen songs Runnin' with the Devil, So This Is Love?, Somebody Get Me a Doctor, Spanish Fly, Unchained and You Really Got Me * Features songs by guest acts Alter Bridge, the Clash, Deep Purple, Foreigner, Fountains of Wayne, Jimmy Eat World, Judas Priest, Killswitch Engage and Lenny Kravitz * Features songs by guest acts Queen, Queens of the Stone Age, Tenacious D, the Offspring, Third Eye Blind, Weezer and Yellowcard